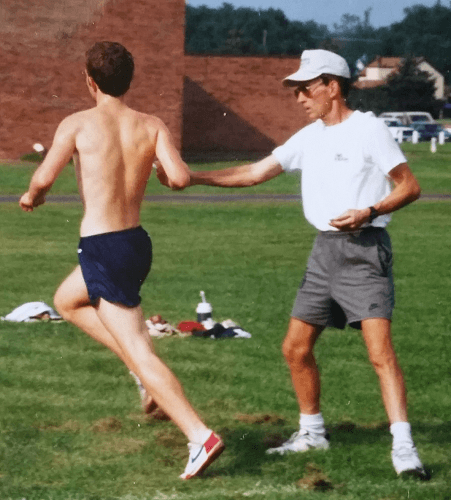 Coach Conway – inspiration, role model, mentor – working the finish line, one of the many jobs a high school coach fills

A personal post this week. As anyone who knows me as a runner knows, my middle school track and high school cross country coach has been a huge influence on my life. To be honest, he has been inside and outside of running.

To explain what Coach Conway has meant to me would take far more words than anyone wants to read in a blog post. To try to keep it short, I highly doubt I would have found my way to distance running without him and it’s no secret how big a part of my life running is. He has done much more for me, though. He taught me to be confident in myself, to be proud of what I’ve accomplished while remaining humble. He’s been an amazing role model on many levels, from the way he freely shares his incredible wealth of knowledge to his work ethic and desire to excel personally as well as be as helpful to as many others as possible.

Well, I just found out that Coach Conway is being inducted into another hall of fame. While he would likely never admit it, a lot of people who know him would agree with me that he can’t win enough of these honors. He deserves all he gets and many more.

Since hearing this news, I’ve been thinking about Coach Conway a lot again. How much he means to me and my life but also how many others out there have had their lives forever shaped in wonderful ways by his guidance. Coach Conway is the reason I started HillRunner.com, the reason I decided to take up coaching and the reason I do everything here. He gave me so much, in so many ways, through running that I wanted to do something to give a little back. I wanted to pay it forward in any way I could. If I can help even one person even half as much as he has helped me, I know I’ll have made this world a better place.

In the meantime, congratulations to Coach Conway! I couldn’t ask for a better inspiration, role model and mentor.