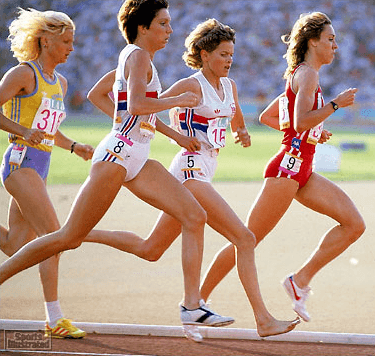 Another study on barefoot running is out. I find this one to be of particular interest because it’s asking a question I would like to see asked more often: is the benefit of barefoot running due to what you’re running in (nothing or next to nothing) or how you’re running (eliminating the heavy heel strike)? I have my opinion on this answer but I’d like to see science back it up.

This is a small study (only 12 runners) so it hardly closes the book on the question but it’s a step forward in beginning to explore the question.

As for the answer itself, it seems to conclude the same thing many people, myself included, believed. The benefits (and risks) of barefoot running have to do more with how we run (forefoot plant) when barefoot than what we’re running in.

Specifically, the runners, whether wearing shoes or not, gain shock absorption when switching to a forefoot plant. Going barefoot and keeping your heel plant, not surprisingly, increases injury risk. The risk of switching to a forefoot plant, also not surprisingly, is an increased load on your calf muscles. Specifically, the gastrocnemius, which is the outer muscle of the calf.

What’s the takeaway of this? Here’s what I’m taking out of it. If you’re going to consider minimal or "barefoot" shoes or barefoot running itself, remember, the shoes are a tool. It’s not the shoes that improve your running, it’s the form changes that the lack of cushioning in those shoes forces. At the same time, proceed with caution. Your calves will need to work harder than they are used to if you currently heel plant. As with anything, build up slowly.

In other words, the same thing some of us have been saying for years, going back even before Chris McDougall’s book was published.