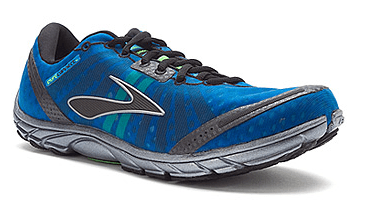 Earlier this week, it was reported sales of minimalist shoes "plummetted" by more than 10% in the first quarter of 2013. It’s being reported that the "fad" is over. People are realizing that minimalist shoes are getting them injured and going back to stability and support shoes. So is this really what’s happening?

I’d argue that, in a way, this is what’s happening but it’s more complex than just that. As with many things (low fat diets followed by low carb diets, for example) the pendulum swung. Through the 1990s and early 2000s, the attitude toward shoes was the bigger the better. Those of us who didn’t want a whole lot of foam and rubber between our feet and the ground were forced to choose from an ever-decreasing list of choices. Eventually, we were down to a handful of "lightweight trainers" or racing flats.

Then came Born to Run. I have some issues with the book (I have been thinking of tackling one big issue I have yet to find an answer to in a blog post but I always feel like I’d just be tilting at windmills when I think of typing something up). However, one benefit is that it swung the pendulum. People began thinking maybe bigger isn’t always better. Unfortunately, as is often the case, the pendulum swung too far, too fast. People went from wearing Brooks Beasts and other similar shoes to Vibram FiveFingers without a proper transition down the line. As I’ve often stated, you can’t go from having your shoe do all the work for you to having it do no work for you overnight without problems. It can take years to go from a fairly moderate traditional trainer to a fairly moderate "minimalist" shoe or racing flat. To go from one extreme to the other in days, weeks or even months is just asking for problems. Even if you don’t need all that shoe, you can’t just ditch it overnight after you’ve become used to it and, to some extent, dependent on it. Worse yet, the message for a while was that minimalism or even barefooting is right for everyone. It will cure every injury, it will make you more efficient and faster. There are no down sides, only benefits.

Not surprisingly, the correction came along. People got hurt, either because they tried to change too fast or because they simply aren’t cut out to run in minimal shoes. People gave up on minimalism. Some people stuck to it because it worked for them but some left. This is what we’re seeing now. Of course, in the marketplace, the manufacturers are usually behind on trends like this. Just like you couldn’t get enough shoes labeled "minimal" a few years ago and they sold at outrageous prices, you’re now seeing a wide selection and prices are dropping rapidly.

What do these market changes mean? Well, there are now more people wearing "minimal" shoes than there were several years ago. I think manufacturers will to some extent keep making shoes for this market. It may be a niche market but it’s large enough that I don’t think Nike, Saucony, Brooks and others want to ignore it. In the meantime, hopefully that pendulum swing will settle to a more reasonable middle ground. People who need more shoe shouldn’t be shamed into getting less shoe than they need to stay healthy. At the same time, people who don’t need so much shoe shouldn’t be ridiculed for wearing racing flats or "minimal" shoes if that’s what works for them.

I’d love to see people settle into a state of saying "I want to wear as much shoe as I need but no more, whatever that means". If you don’t need the 17 ounce shoe, try the 15 ounce shoe. If that still seems like more than you need, try the 13 ounce shoe. Eventually, you’ll find your sweet spot. That’s where you want to be. More isn’t always better but less also isn’t always better. Some people will still be wearing the 17 ounce shoe because that is what they need. Others will keep wearing FiveFingers because that is the shoe that works for them.

In the meantime, I’ll keep sticking with my roughly 7 ounce moderately cushioned shoes. In April, I even bought my first pair of "minimal" shoes (see the picture at the top of the post to see what I will be wearing as I head out to run today). They cost me less than the racing flats I usually get and, structurally, are extremely similar. I like the current market. The price points are very nice.