This winter, I hit another age group as I turned 40. Seeing as I have little to no interest in racing during the winter these days, I wasn’t sure what race would become my first in this new age group. At first, I was thinking of the Legal Run Around in Fond du Lac but things just didn’t work out for various reasons.

As I was looking over my schedule and what I had in mind for late spring/early summer races (one too close to home to pass up and another that’s a favorite of mine and I have to correct a wrong from last year at) I realized Gary’s Gallop fits into the schedule perfectly. So that’s where I found myself this morning.

As it turns out, though, I completely wasted the opportunity of my first race in this new age group.

I arrived at the Wisconsin Lutheran College athletics grounds a little unsure of what today would bring me. I had a decent but not great winter of training. I feel I’m fit. By the end of this week, I’m feeling as healthy as I’ve felt in at least a couple months. However, I’m not yet race sharp. High level of general fitness, low level of race specific fitness. Of course, that’s what you expect at the first race of the year, right?

On top of that, I had some things going on this week that had me a little off my game. My refrigerator stopped working and we can’t get a new one delivered until next week. So, along with the stress and hassle of dealing with that, my diet has been thrown for a loop as we’re trying to avoid any food that would need to be cooled. I also have several things going on that just had me more busy than I usually like on a race week. So I wasn’t quite sure how great my energy levels would be.

That said, I was there to race. I’d do the best I could, whatever that meant. So I checked in and got ready to warm up.

I was originally planning to warm up on the course but, when I got past the start line, I quickly realized a gate about 100 yards in was still closed. So I detoured onto the track and did my warmup there. I have to admit I didn’t feel too springy on the warmup but I was getting things worked out and feeling at least a little better.

At the start, I was eyeing the competition. It looked like a few good runners but nobody I could pin as someone who would surely run away from me without a problem. Whatever the case, this was going to be a day of pure racing, not time trialing. This course doesn’t have ridiculous hills but it is undulating with a general downhill trend early and uphill late. Combined with a fairly stiff second half headwind, this was a day for real racing.

At one point, I overheard a conversation where someone asked a friend if another of their friends would be winning. “Yeah, of course” was the answer. That kind of rubbed me the wrong way. I sure didn’t see anyone who looked to warrant that sure of a statement. Oh well. If pre-race prognostications were always right, we wouldn’t need to run these things.

I lined up next to the two guys I pegged as the most likely lead competition. I was wrong. At the gun, I found myself right behind one of them as he acted surprised to be in the lead. Down a slight decline, I took the lead and picked up my police escort. It’s been a long time since I had a police escort so I thought for a moment how fun that was. Then I focused on getting a read for who was behind me. I could tell someone was there, I didn’t think it was the guy who started out in the lead but I couldn’t be sure until he pulled up next to me and I could see he wasn’t.

For the first mile, we were back and forth. At times, I’d get maybe a half step lead. At times, especially up one of those inclines, he got a one step lead. We were always right there, though.

We were being given splits everywhere. I heard a 4:05 and jokingly said I sure hope that’s not the mile split. As it turns out, I believe I heard 5:45 just before I hit the mile.

Around this time, I noticed that the guy I was running with was breathing pretty hard. Not to the point I thought he was about to crash but hard enough that I could tell he was working harder than me. Shortly after, we went up a slight incline and I let him get a slight lead, maybe 1 step. As we were going up this incline, I told myself the top of this incline is my moment. He’s working harder than me, he’s pushing the incline a bit so he’ll be a little more fatigued by the top, and I want to get away so he can’t draft off me into the headwind when I make my long move to the finish.

So we crest the hill and I go. I gave him enough of a lead by the top so I could accelerate before pulling up by his side, which would make my move feel more decisive. I accelerated and went by him with no fight. He just let me go. I kept pushing for a bit, then settled back into pace.

Around the turnaround and into the headwind, I could see I had about a 2-3 second lead on him and a third guy who was pretty much right with him at this point. I decided for the moment to just maintain and get to mile 2 before trying to open up a bigger lead. At least nobody was drafting off me. That was the only purpose of the lead at this point. So I settled in behind my 2 motorcycle escort and just focused on keeping as much of a rhythm as I could over this undulating course.

I cruised through the 2 mile mark, which I believe I recall being on one of these inclines. Once I crested the top, I put a little extra in, trying to stretch what I could sense based on splits being called was about a 3 second lead. At this point, I either wanted a bigger lead or the guys behind to have to work so hard they would have nothing left if they did catch me. I continued this into a second turnaround behind the stadium, then into the parking lot.

Around a turn and entering the track and football field, I picked it up a little more but knew I had the win tied up and my time was going to be off due to the course and the wind so I didn’t really try to light it up. I cruised into the finish in 18:06 and got to break the tape.

It’s been a long time since I’ve either had a police escort or got to break the tape at a race. It was fun to get to do both.

As for my first race in the 40-44 age group, though, I kind of wasted that opportunity. Who needs age groups when you get the overall win?

This is a fun race. Definitely not where you go for a fast time with the deceptively challenging course, two 180 degree turns, and today with the wind. However, it’s a good chance to get the competitive juices flowing and get an early season tune up.

Plus they have some nice hardware: 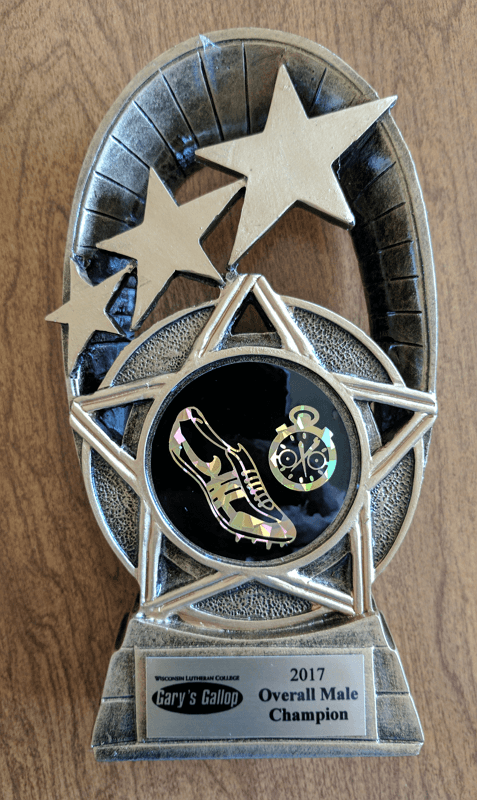