Last year, I got a little bored with always showing up to the Walleye Run 5 miler and finishing in the top 10. So I decided to try adding a challenge: the 2 mile, which starts 75 minutes after the 5 mile starts.

It didn’t go so well. Between not great preparation and ridiculously warm weather, the wheels came off in the 2 mile.

Pretty much before I finished the 2 mile, I knew I would be back this year to do it right. I couldn’t let the experience end that way.

This year, in preparation for the double, I changed a couple things in my training. First, I really worked to toughen up the calves. Second, I actually did some quarter mile repeats. I did them at the back end of workouts, when already tired, because I wanted to simulate what I would be experiencing during the 2 mile, after already racing the 5 mile, but this is the first time in a long time I have done quarters in any format.

During the week of the race, I was a little concerned. I felt like maybe I had one week too much of hard training. I was really having trouble recovering in time for the race. I was worried that especially my left hamstring would not be ready and that could spell trouble, especially at the faster pace I was thinking of for the 2 mile. That said, by late week, things were getting quite a bit better by the day. The morning of the race, there was a little lingering tightness but not enough to be concerned about.

I was watching the weather report for the race and it looked like the forecast was getting warmer as the week went on. On the morning of the race, it was already in the 70s by the time I got there and the wind was getting a little noticeable. I picked up my bibs and found a good spot between the start lines and the finish line. I brought 2 singlets so I’d have a clean and dry one to start each race so I was able to put both bibs on a singlet and then I went out for my warmup.

The warmup didn’t feel great. I just didn’t feel all that sharp. That said, I was still confident that I can at least lock into 6 minute pace and ride it out. On my strides, I even started feeling halfway decent.

At the start, I got out well, initially in about 8th-10th place before letting others burn themselves out and settling in around 12th-13th. After a fair bit of relatively straight running, we go around a gradual turn to the left where there was a Chevy display this year with a handful of vehicles blocking the inside of the corner. Fortunately, traffic wasn’t too bad and I was able to get out and around this display. After negotiating the display, I worked my way up a bit. I figured I was in about 10th-11th place after passing a few people, then someone said we were all in the top 10, which meant I figured I was in 9th place. Just before the mile, I caught a fairly young looking runner and he surged as I pulled up next to him. He pulled ahead a bit, then settled in and when I came up by him again he surged. Right about at the mile mark, he finally didn’t have it to maintain and dropped back. With an earlier, uneventful pass, this got me into 7th place.

5th and 6th were spread out in front of me, seemingly within reach but at a distance that I felt would require some patience and gradual whittling away at the lead. As I was trying to first just maintain the distance 6th had on me, someone joined me from behind. I didn’t want to let him just pass me so I picked up the pace and ran with him. We went back and forth a bit but mostly were going side by side through the 2 mile and well into 3. At one point in mile 3, there was a family on the side of the street and he said that was his family. I took just a touch off the gas so he could be a half step ahead of me for the kids and the photo op, then I joined him again once the family was behind. After a turn, I felt like 6th place was falling back just a bit and I said we can catch him, let’s go. His response was I can’t, I’m just going to try to hang on to you. So I set out in trying to work on 6th and this guy I was running with fell a couple steps back.

Neither catching 6th or getting away from 8th was coming easily. It was getting very warm, the headwind at this point was somewhat cooling but mostly was just sapping my legs. I pushed on, kind of yo-yoing with 6th place, and never completely separating from 8th.

At one point shortly before the 4 mile mark, 6th nearly caught 5th and I was thinking he was going to be the guy to chase, possibly fading and not too far ahead of me, but he responded and pulled back solidly into 5th. Meanwhile, I was not gaining on 6th overall. The good news was that it seemed 8th was falling back some.

Typically, with a mile to go, I reassess and tell myself it’s a mile race now. This time, I reminded myself I have another race to go. It was becoming more and more clear that I wasn’t going to catch 6th so all I had to do is run hard enough to not get caught by 8th. I still took a shot or two at moving up on 6th but it just wasn’t happening so I ended up in the last 1/2 mile and last 1/4 mile not trying to pick it up like I usually do. Comfortably in 7th down the final straight, I picked up the pace a bit but I didn’t kick. I was focusing on saving something for the 2 mile.

After a short time congratulating other runners, I grabbed a couple cups of water, then headed back to my gear. I changed back into my warmups, pushed a lot of fluids, stretched, then did a little running to keep warm and loose. On that bit of running, I realized how difficult the 2 mile was going to be. The 5 mile, combined with the heat and battling the wind, sapped my legs of their speed. I did a couple strides toward the end of that running and just didn’t feel sharp at all. There was just no snap in my legs. That said, I knew I was fit enough to at least gut this one out and I had toughened up my legs so I was confident they wouldn’t fail me this year.

After some more stretching and switching singlets and back to my racing shoes, I went over to the start line. I saw Josh, we chatted a bit, then did what we had to in order to complete our preparations. I did a little mobility work and a few strides and form drills, then lined up.

At the start, I again felt like I got out well, then settled in to let the fast starters burn themselves out. This time, even after warning Josh to be careful of the Chevy display, I found myself getting into a place where I nearly got myself in trouble. I extricated myself just in time and moved out to actually pass a couple people while going past the display.

Pretty quickly, I found myself in about 8th place with potential targets to pass still in front of me. The legs are holding out and things are looking reasonably good, especially compared to last year. Eventually, I work myself up to 5th place, less than a half step up on 6th who happened to be someone I was talking with at the start who was targeting a similar time to me and was in my age group. That didn’t matter, though. I was now seeing the potential for a top 3 finish and the opportunity to make age groups irrelevant (top 3 overall are a separate category). Through the mile in 5th with 6th right on my heels, I was now closing on 4th. Around a turn and I turned on the gas a bit. I passed both runners ahead and moved into 3rd before going around another turn.

Now, second is pretty far ahead but I have a lot to run for here. I have at least 2, if not 3, guys right on my back. I’m in for the overall top 3 finish if I can hold them off. I know what that means, don’t let it come down to a kick. Every step, I’m telling myself to push a little harder. The legs don’t like it but they are doing all they can. I can still feel one guy on my left shoulder. Then he moves to my right for a few moments before moving back to my left. He’s drafting on me as we run into what is a pretty stiff headwind. But what can I do? If I let up, will he even take the lead and let me draft? Anyway, if I do that, I’m just setting him up to outkick me. I know my only hope of holding him off is to run his kick out so this is my only option. So I go on pushing, hoping I can take the sting out of his legs. We come around a turn and are approaching what I know is about 1/4 mile to go. I want to be moving before we get that close to the finish so, about 100 yards before my 1/4 mile to go mark, I pick up the pace. I knew I wasn’t picking up the pace much but it was all I could do. In response to that, the guy on my shoulder picks up the pace more. I want to respond but my legs have nothing. Right behind him is the guy in my age group. With about 1/4 mile to go, it looks like he might get the pass to move into the top 3 but this younger guy ends up pulling away.

Meanwhile, I want to run faster but I just don’t have it. I do my best and just hope nobody is going to catch me from behind. Fortunately, nobody did.

Overall, I’m happy with this. The times weren’t quite what I was hoping for but I think everyone’s times were off a bit with the heat and the wind both taking their toll. More importantly, I finished in the top 10 overall and the top 3 in my age group in both races. That was essentially my goal going in and I did it comfortably.

Plus they had some nice hardware. This year, coasters for age group awards: 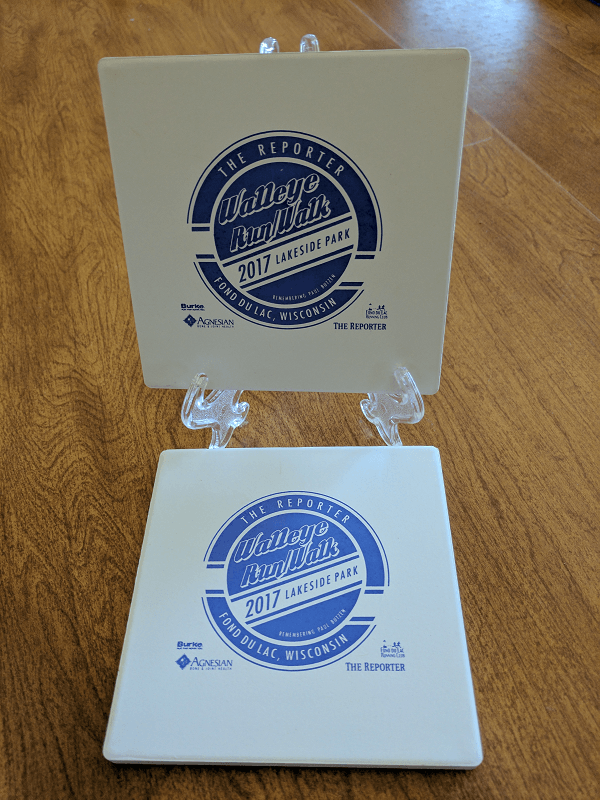 Will I do the double again next year? I don’t know. Running 2 races with roughly 45 minutes between the finish of the first and the start of the next is brutal. My legs are going to hurt for days after this. That said, it is a fun challenge and I hardly think I’ve mastered it.

Just scanning the results, it looks like I was the only finisher in the top 10 of either race to also finish in the top 20 of the other. Maybe aiming for that kind of accomplishment, if not top 10 in both races like I pulled off this year, is a new challenge to keep going for over the next few years. Until I get bored with that and decide to move on to something else.