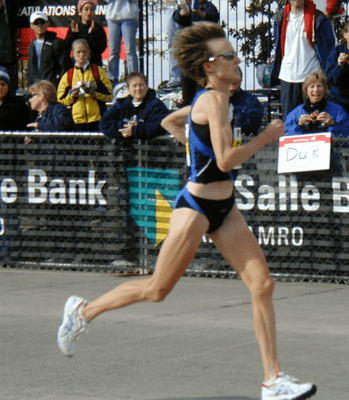 I bet Deena knows this "trick"

It seems like everyone is looking for it. What’s that magical workout that will make you PR at your next race or beat that big rival who you just can’t get ahead of? What’s that one workout that all successful runners do? What’s this or that coach’s or athlete’s go to workout?

I’ll tell you my secret sauce. It’s not mile repeats or progression runs or long runs. It’s not something we do every week for three months. In fact, ask the runners I coach and they will tell you that I don’t even like doing the same workout two weeks in a row.

There’s a reason I don’t like doing the same workout even two weeks in a row. Too many runners see the same workout they just did on the schedule again and they get competitive with themselves. If I did my mile repeats last week in 7:10, I should be better now so I should do them in 7:05 this time. Next week? 7:00. Then I’m under 7:00!

That’s not the secret sauce. That’s a recipe for disaster.

So what is the secret sauce? Simple: consistency. That’s it. If you get out there and follow the plan week after week, month after month, year after year, you’re going to see good things happen. Not every workout will go perfectly and some workouts may even be missed but that doesn’t matter because the key isn’t in any single workout. It’s in doing the workouts, long runs and easy days that are on the plan according to plan the large majority of the time. If you consistently get the plan done with only the occasional misses here and there, you’ll see results.

Yes, it’s true that some planning needs to be made. You need to do the right workouts at the right time. You need to make sure you cover your bases. You need to prioritize the right kinds of workouts. However, those are the details. The big picture is that you need to be doing the work day after day, week after week, month after month. That’s the true secret sauce.