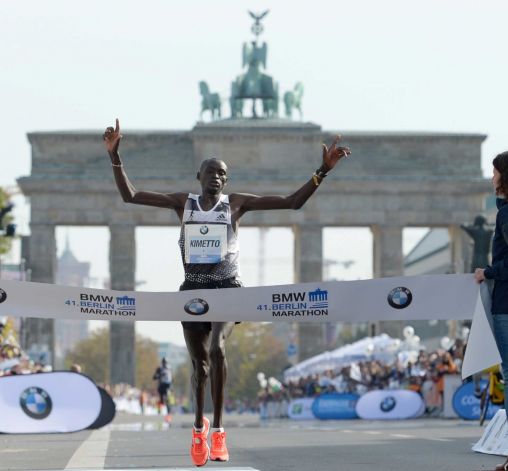 I wrote a little about this Sunday when posting about Dennis Kimetto taking the marathon world record under 2:03 but I don’t think I’ve written a full length post on this so here it is.

Every time the record is broken and, especially, when a "minute barrier" is broken like we saw on Sunday, the discussion always starts: how soon until we see someone run a marathon in under two hours? It seems like, every time we go through a new "minute barrier", we get predictions that breaking through the two hour barrier is imminent. It’s only a matter of 5-10 years. I’ve been hearing that it’s only a matter of 5-10 years for over 10 years now and I wouldn’t be surprised to hear the talk has been going on even longer.

The fact that "within 10 years" has been going around for over 10 years should say something about how likely these predictions are. However, let’s look at the factors involved. I’d like to look at things by the numbers and consider recent trends in distance running and what they might mean for the future.

First, the progression of the world record. Let’s consider how long it took for each "minute barrier" to be broken:

I started with the 2:08 barrier because there’s debate about when the 2:09 barrier was broken. It was either 1969 by Derek Clayton (this is a disputed record, due to a course that was possibly 500 meters short) or 1981 by Rob De Castella.

There are a few ways we could look at this:

One thing to notice about the above trend: Notice how the 2:06 barrier took 11 years to break? The 1980s was a golden era of marathoning. One could argue it only took 4 years to break the 2:08 barrier, then 3 years to break the 2:07 barrier. Then it took 11 years to see the 2:06 barrier broken. This is the reversion to the mean we would expect to see. I wouldn’t be shocked if, after seeing "minute barriers" broken fairly regularly recently, we are heading toward another dry spell relatively soon. Even if not, don’t expect that 4-6 years per minute improvement to accelerate.

So the progression so far suggests, in my opinion, that we’re looking at another 17-18 years, give or take, before we see a 1:59 marathon. What other considerations should be taken?

The top rung of the marathon ladder right now is awash in money. Between huge appearance fees, generous prize money, time incentives and additional prize money from the World Marathon Majors, the best of the best marathoners can make a lot of money. More than that, though, money in distance running on the track is drying up. In fact, the 10,000 itself – the event we’d expect to be the closest crossover to the marathon – is a dying event on the track. It’s very infrequently run outside of championship meets and not a big money event. Not surprisingly, we’ve seen times stagnate or even regress in that event. The world record in that event will turn 10 years old next year and nobody is challenging that record. By world class running standards, nobody is even close. That’s at least partly because all the talent that used to be running the 10,000 is moving up to the more lucrative event.

As all the best talent moved up to the marathon, skipping the track or at least spending much less time on it, we see runners at their prime trying the marathon. In the past, the usual trend was to run track through your prime, then move up to the marathon. This was surely the path followed by Paul Tergat and Haile Gebrselassie. Since Geb, though, we have Patrick Makau, Wilson Kipsang and Dennis Kimetto breaking the record. These are not big name track guys moving up to the marathon. They are marathon specialists.

This money in the marathon and the resultant marathon specialist running the marathon in his prime is a historical shift within the sport. It’s a one time event that will produce a surge in improvement over the short term but will not drive continual progression. Eventually, the progression will slow. I wouldn’t be shocked to see the 2:02 barrier broken within the next decade but then things are going to move a little more slowly unless or until we encounter another historical shift.

The late Samuel Wanjiru was a fearless runner. He’d attack from nearly the very beginning of a marathon and would not relent until he crossed the finish line. He is often credited with changing the philosophy of the top marathoner. Instead of a marathon being a 20 mile warmup followed by a 10K race, it became a race from gun to tape.

This racing philosophy and the corresponding training philosophy is mentioned by the great Renato Canova in his review of the record.

This approach surely played a role as guys are more willing now to lay it all on the line early. Sure, it results in some epic disasters at times but it also results in guys coming closer to their ultimate potential.

Again, though, this is a one time occurrence. As guys refine this approach in order to walk the line of epic disaster without going over, they will continue to incrementally improve but the big gains from changing the approach to racing a marathon have already been accomplished.

It would be remiss of me to ignore another point that was brought up to me after I made my comments about this on Sunday. I was reminded that this golden age of marathoning doesn’t just coincide with more money in the marathon. It also coincides with more stringent doping controls in track and field. Is it likely that the drug cheats are moving to the less stringent marathons? Absolutely. However, in the same way that I describe money creating a relatively short term spike in improvements above, the drug situation would do the same thing. The difference would be that, if marathons follow track and field some time in the future, we’d actually see a regression in performances. That would mean expect to wait even longer.

Note: I’m not accusing Kimetto or anyone else individually of doping. I don’t believe in saying "he’s so fast he must be doping". I believe you better have some kind of solid evidence before making such severe accusations. However, it would be naive to think nobody is. It’s possible that dopers are raising the depth of the field and that’s requiring honest athletes to push that much harder to rise above the pack.

This is truly a golden age of marathoning. We’re seeing amazing times at almost every race that could not have been imagined even a decade ago. If you like insanely fast times, I hope you’re enjoying this. Just don’t expect it to continue at this rate indefinitely and definitely don’t expect it to accelerate. That means don’t expect a 1:59 marathon in the next decade. Maybe in the next 20 years but I’m not even convinced we’ll see it in that amount of time.